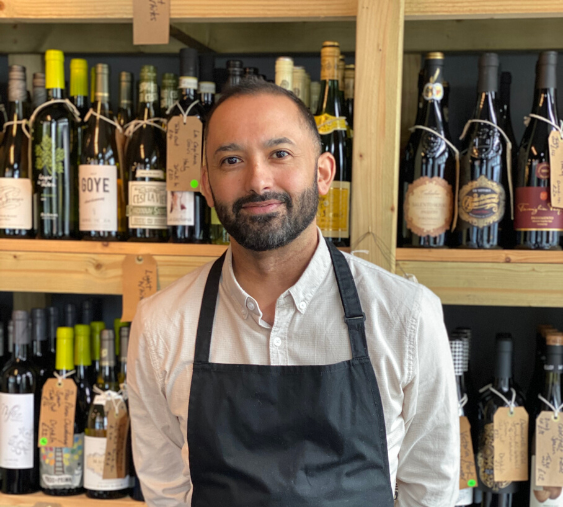 One of Urmston’s great success stories, Kelder initially started life in 2015 on the Urmston Artisan Market and flourished from there.  Fred’s initial idea was to see if people were interested in wines that were different from those available in the supermarkets and if there was a (liquid) appetite for new, exciting and usual wines sourced from around the world and delivered locally for the people of Urmston to enjoy.

Since moving to Urmston in 2002, Fred was always keen to have his own ‘bricks and mortar’ business in the town centre.  Over the years, there were many different ideas for businesses, but all of them involved wine in some way – and it was only after visiting a similar business with friends that the concept of Kelder was fully born.  Starting out on the Artisan Market taught him so much, and he is grateful to both Denise at The Market Co and the people of Urmston who come to the market in all weathers, for their support in those early days.  So much so, that Kelder can still be found at the market on the first Saturday of every month – mainly because they love the artisan vibe and atmosphere of the event.

Opening just before Christmas 2017, Fred was overwhelmed with the support that he received when the wine bar and shop launched.  Since then, the business has steadily grown, adding new wines to its offering and expanding into events and tastings.  A wide range of fabulous wines are available by the glass making Kelder the perfect place to pop into for a quick catch up with friends or before heading for dinner elsewhere in the town.  Fred has even started offering a small amount of food and is working with other local independent suppliers as far as possible to ensure everything is sourced locally.  His pork pies are supplied by Urmston’s local butcher Howarths on Flixton road, his tea is from the Market Tea Lady and coffee is from Heart and Graft – but his focus remains firmly on wine.

When Fred first opened he stocked around 70 wines from around the world, the list now exceeds 150 and is constantly expanding.  Sourced directly from the wine makers, and in small production runs where possible, wines are available to take out, or drink in by the bottle with organic, vegetarian and vegan options available too. Kelder only stocks wines that pass Fred’s expert taste test – so whatever you choose you can be sure that you know you’re getting a wine that looks and tastes good.

As for Fred’s favourites, he has too many to list and his preference changes as new wines are discovered, but he always comes back to a good red, and anything that has been resting in a barrel for a few years will get his vote, especially a grand reserve Rioja.

Fred loves living and working in Urmston, he loves the community spirit and friendliness of the town and the feeling that business owners have that the residents want them to succeed.  What does he wish more people knew about wine?  That wine shouldn’t be intimidating.  Wine pairing with food is one thing, but we can pair wines with good times, friends and family and loved ones and Kelder offers plenty of wines that are best enjoyed with Saturday night TV as well as steak.

STOP PRESS! Wine lovers of Urmston need not fear! While Fred might not be able to operate the bar at the moment, he has expanded the wine shop instead and is still open seven days a week but limited to only one customer at a time.  He’s also offering local deliveries via the Shocal app.  So there’s no need to go without your favourite wines while isolating at home, in fact, it’s the perfect opportunity to try something new!

We use cookies on our website to give you the most relevant experience by remembering your preferences and repeat visits. By clicking “Accept All”, you consent to the use of ALL the cookies. However, you may visit "Cookie Settings" to provide a controlled consent. Read More
Cookie SettingsAccept All
Manage consent

This website uses cookies to improve your experience while you navigate through the website. Out of these, the cookies that are categorized as necessary are stored on your browser as they are essential for the working of basic functionalities of the website. We also use third-party cookies that help us analyze and understand how you use this website. These cookies will be stored in your browser only with your consent. You also have the option to opt-out of these cookies. But opting out of some of these cookies may affect your browsing experience.
Necessary Always Enabled
Necessary cookies are absolutely essential for the website to function properly. These cookies ensure basic functionalities and security features of the website, anonymously.
Functional
Functional cookies help to perform certain functionalities like sharing the content of the website on social media platforms, collect feedbacks, and other third-party features.
Performance
Performance cookies are used to understand and analyze the key performance indexes of the website which helps in delivering a better user experience for the visitors.
Analytics
Analytical cookies are used to understand how visitors interact with the website. These cookies help provide information on metrics the number of visitors, bounce rate, traffic source, etc.
Advertisement
Advertisement cookies are used to provide visitors with relevant ads and marketing campaigns. These cookies track visitors across websites and collect information to provide customized ads.
Others
Other uncategorized cookies are those that are being analyzed and have not been classified into a category as yet.
SAVE & ACCEPT
Powered by